The pledges are in, and the budget is set. Now ALL IN: Kingdom IMPACT is ready to roll. Randy recently did a Church Family Update via video - because he was in the Gym hosting our Investigative Forum (IF). As part of our ALL IN effort, we as a church are seeking to Greet, Befriend, and Invite friends and family to meet Christ at Perimeter.

Click the image below to view the Family Update from April 29. 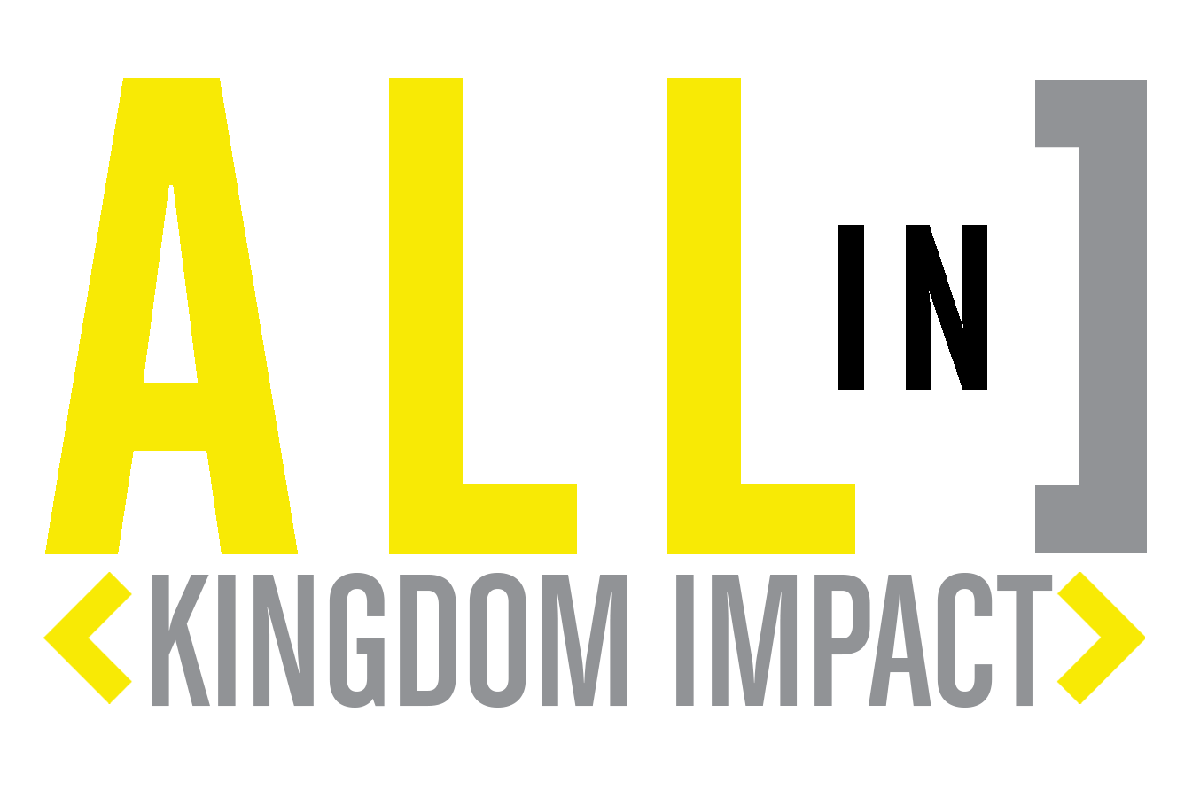 ALL IN Financial Update

IMPACTING The Next Generation

What do Summerour Middle School, Promise686, and PAWKids have in common? These three organizations are working hard to improve the lives of children and families in and around Atlanta.

Over the next year, we want to highlight ways that your ALL IN gifts are making a difference outside the walls of our church. Your ALL IN gifts fund Perimeter's Kingdom Investments ministry - which helps fund like-minded ministries through grants, training, and mentoring. Click on the image above to see how families and children are benefiting because you went ALL IN! 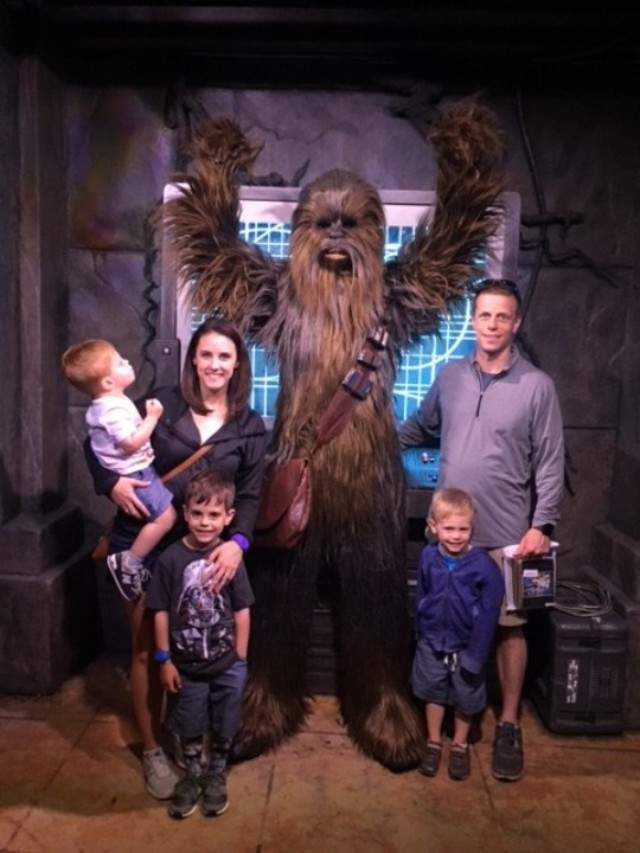 In this series, we want to tell the stories of ALL IN donors who will be the "Next Generation Givers," fueling Perimeter's ministry through the coming decades. God has gifted each of us differently and given each of us different levels of resources to manage. However, as with the story of the talents, He charges all of us to steward well everything He gives us - and to use His resources to expand His Kingdom IMPACT.

“Bring the full tithe into the storehouse, that there may be food in my house. And thereby put me to the test, says the Lord of hosts, if I will not open the windows of heaven for you and pour down for you a blessing until there is no more need.” Malachi 3:10, ESV

We all have habits - both good ones and bad ones. For Benjamin and Mary Jo Howell, tithing is a habit borne out of years of obedience to the challenge of Malachi 3:10. But what happens when that habit suddenly becomes a huge test of faith in Jehovah Jireh - the God Who Provides?

“When I was in college, I remember struggling with the discipline of tithing as I was putting myself through school. I spoke to my college pastor about it and he shared Malachi 3:10 with me and challenged me to test God,” said Benjamin.

His pastor basically explained that it’s easier to tithe when you have nothing than when you have something. And the more something you have, the harder it is to let go of it.

But earlier this year Benjamin was facing a period without a job. How do you tithe when you don’t know if you’re the paycheck in your hand will be your last for a while?

“I will always remember tithing off my final paycheck, not knowing when the next paycheck would come,” said Benjamin. “It was probably the first time I ever felt that I was truly going ALL IN with my tithe. But God provided perfect peace to my wife and I during that transition.”

His family is active in Perimeter Church, both through discipleship and serving in the nursery where their three boys - Eli, Brooks, and Holden - spend their Sunday mornings. But Benjamin looks at his time on the board of Kingdom Investments as a particularly exciting time because he got a “behind the scenes” look at what God was doing with our ALL IN giving.

“Through serving on the KI board, I got to directly see and hear the impact Perimeter is making locally and overseas with our investments,” said Benjamin. “We are truly blessed to be part of a church that is outward-focused.”

So … as a man who was challenged to start tithing when he was in college, does he have advice for his generation and the ones to follow? Definitely.

“Adopt the discipline of tithing now while there are fewer temptations not to. It may impact your lifestyle, but you will not regret it. If you feel you can’t afford to give because you have children or a lot of financial commitments, I would encourage you to start by giving a very small percentage now - maybe just 1 or 2% - and set a goal of what you would like to give one day in the future. As time passes, and vehicles or other debts are paid off, use those as opportunities to increase your giving percentage and draw closer to your goal.

“Ultimately, tithing is a stewardship decision dictated by who we believe is in charge of our possessions, us or God. When we die and get to heaven, I can assure you that you will not look back and wish you had given God less but that you had sacrificed and given Him more,” said Benjamin.

"Attempt something so great for God, that it be doomed to failure, lest God be in it."

That's what we call Lean Forward and Flap!

Have you gone ALL IN to have Kingdom IMPACT?

It's never too late to go ALL IN. Although Pledge Sunday has passed, your opportunity to be a part of it has not. If you'd like to make a two-year pledge to ALL IN: Kingdom IMPACT you still can!

Please feel free to contact either Gordon or Bob for all information about ALL IN or answers to your questions:

Click below to see past ALL IN status reports. 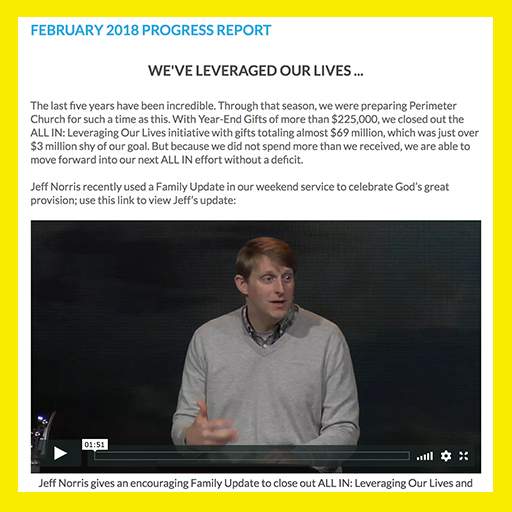 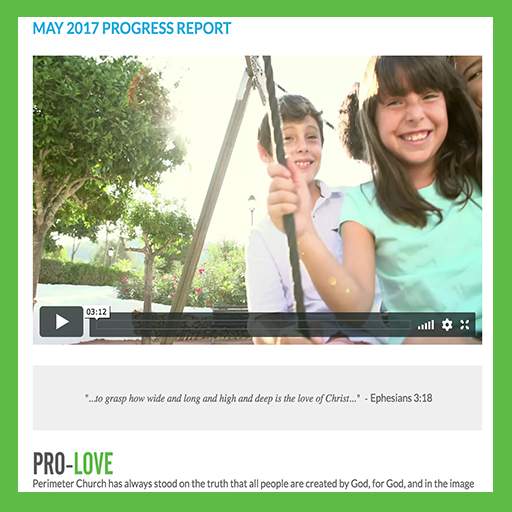 May 2017: Pro-love and the Continuum of Care 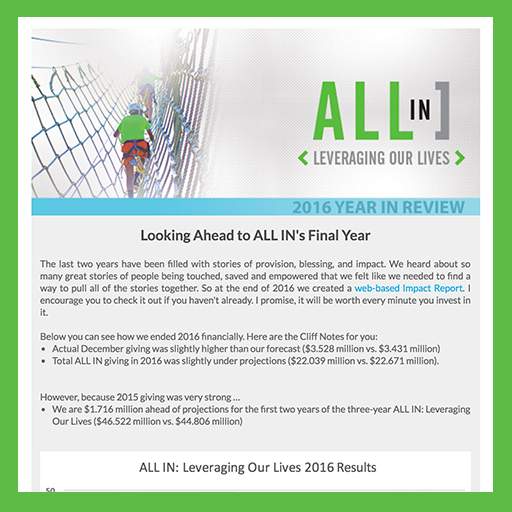 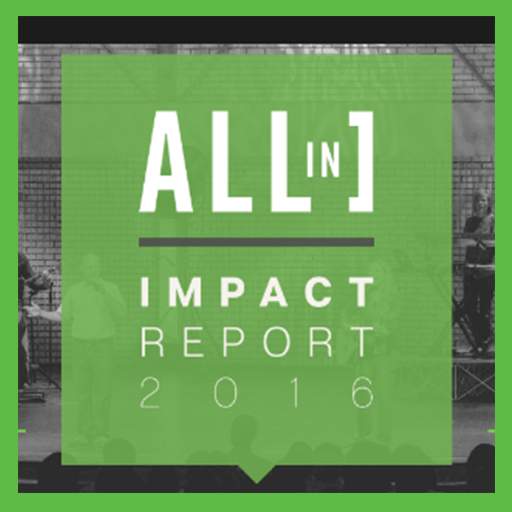 November 2016: ALL IN Impact Report 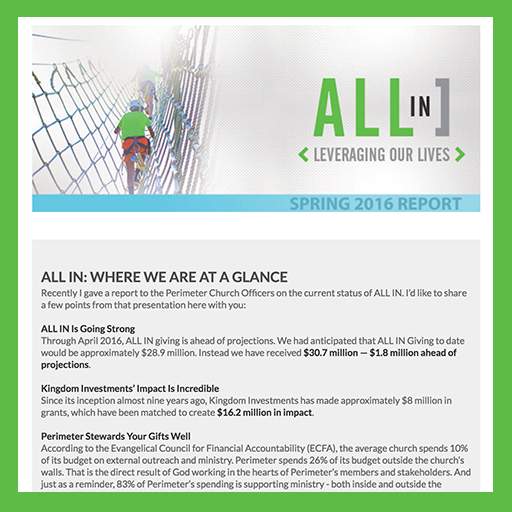 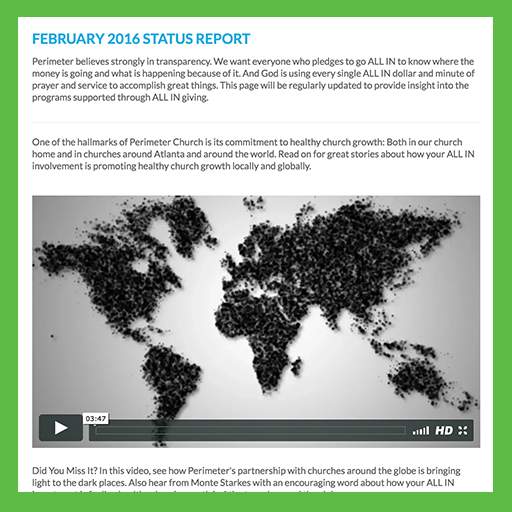 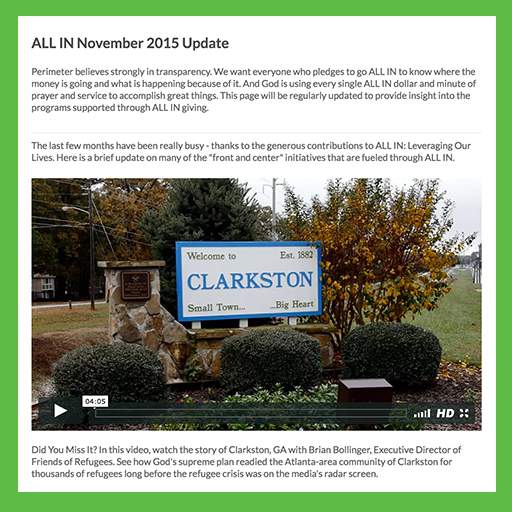 November 2015: Refugees From Across The World Come To Clarkston, GA 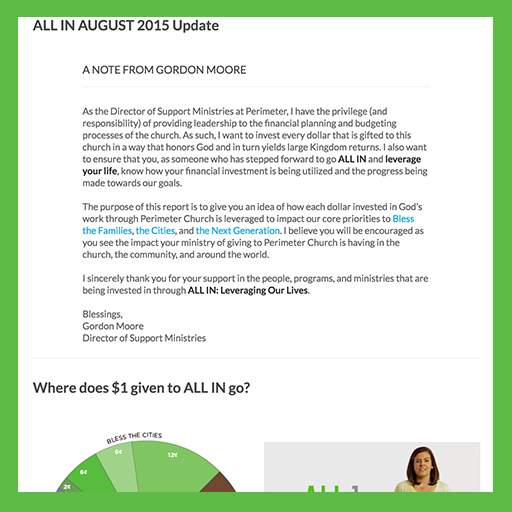 August 2015: Blessing The Cities, Next Gen, And Families