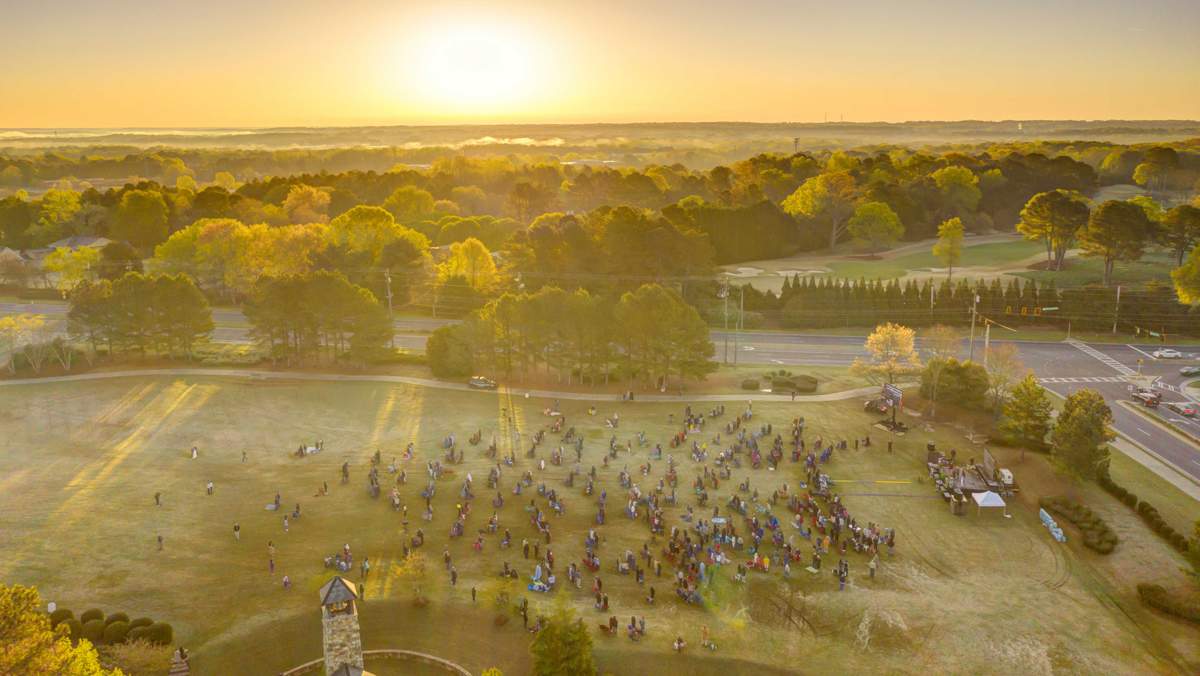 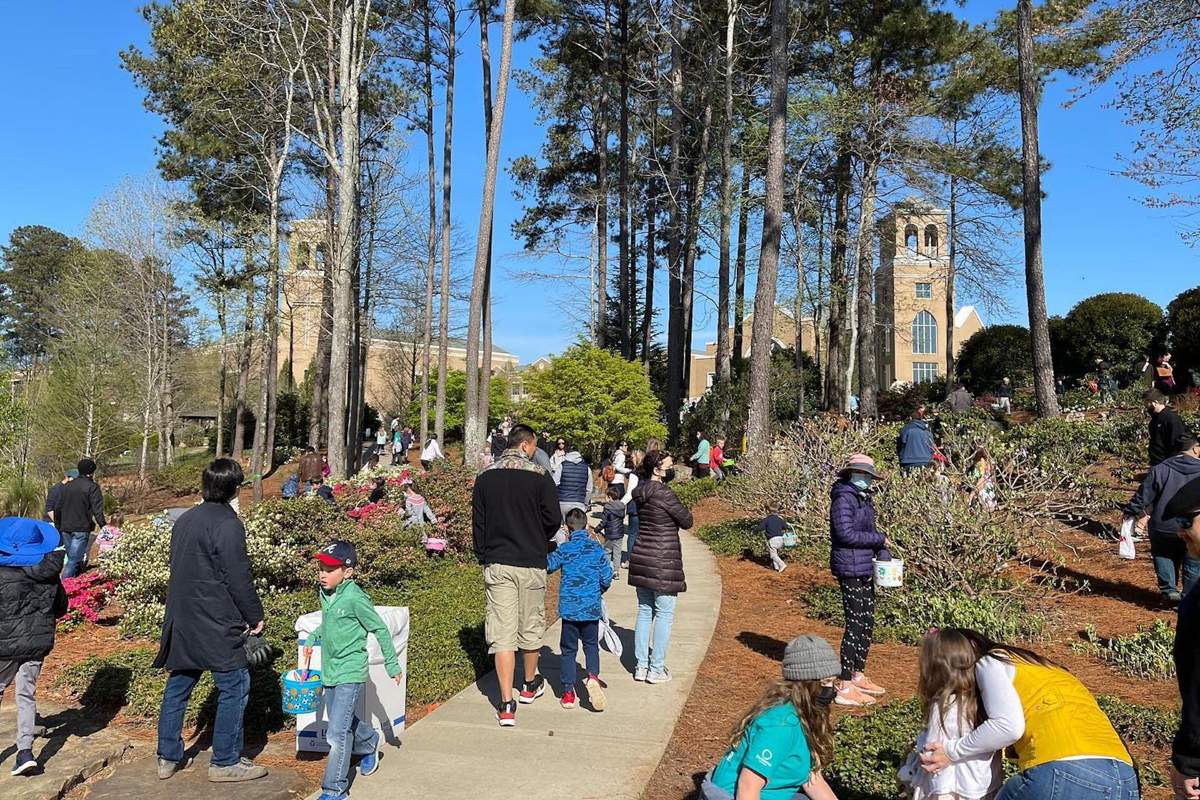 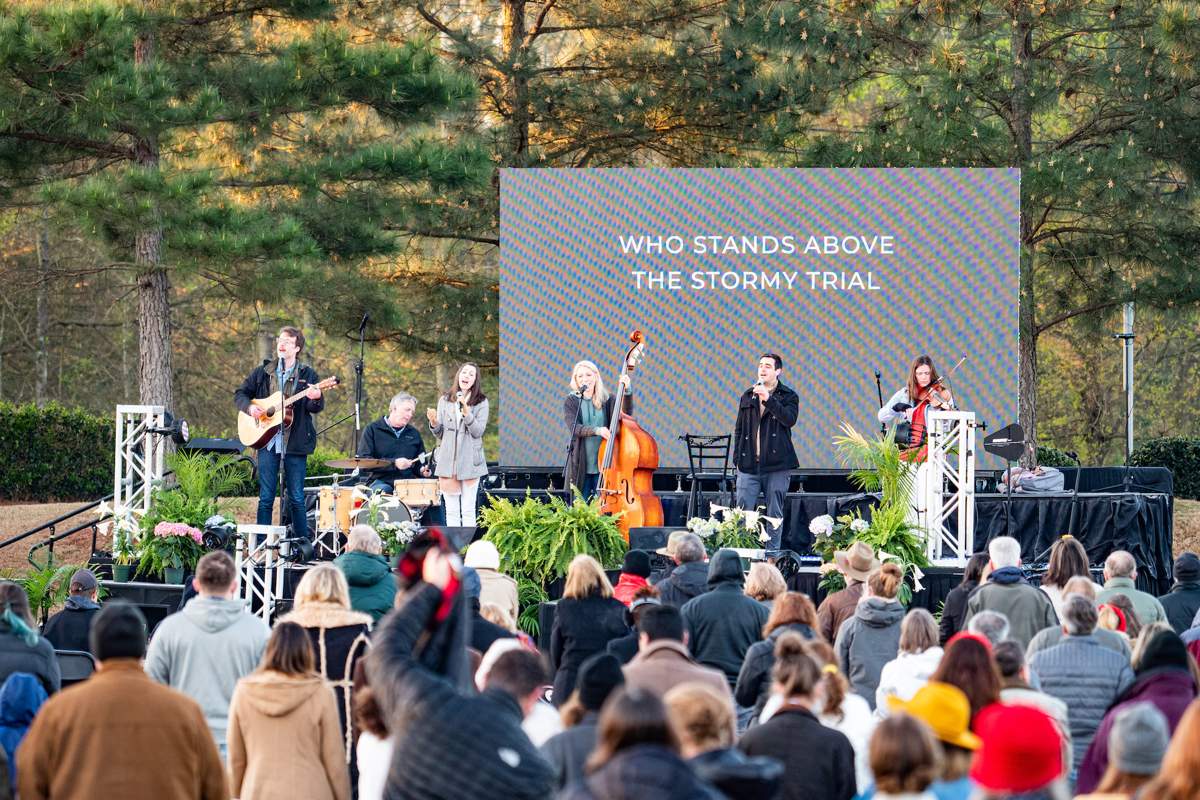 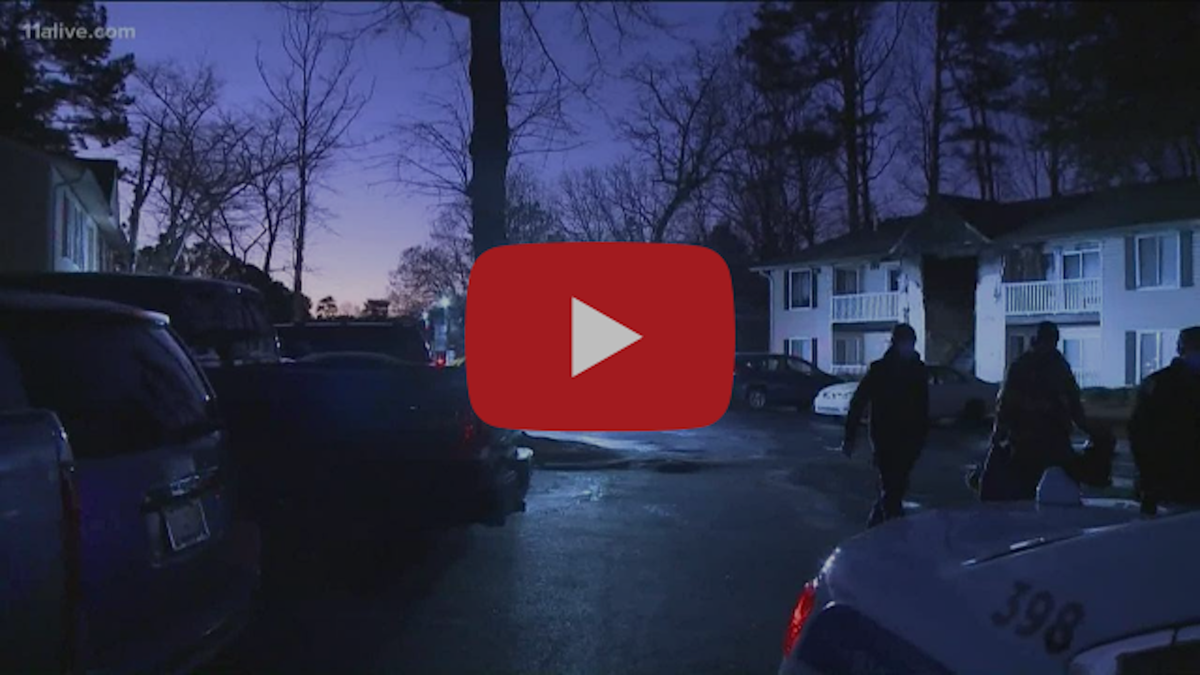 11Alive News covered the apartment fire which displaced 20 people the day after Christmas 2020. Those affected included a family of three—soon to be four— who were left with nothing but the clothes on their backs. That's when the Impact Peachtree Corners Team got the call to come alongside and serve.

When several units of the Meldock Woods apartment complex went up in flames the day after Christmas, 20 people were left temporarily homeless. The management helped them get into new units quickly, which was a blessing. But if you're a couple who are barely making ends meet already, with one daughter with Downs Syndrome and another child on the way, you look at the bare floors and empty cabinets, and say, "What do we do now?"

A Perimeter contact with Unite! reached out to the Impact Peachtree Corners leadership. In no time, three different discipleship groups started collecting new and used household items — everything from kitchen utensils to bed linens.

"When we walked into the apartment that first time, I was stunned," said Sally ten Pas, from the Impact Peachtree Corners leadership team. "They literally had nothing. There was one mattress on the floor."

Thanks to Fully Furnished Ministries — a ministry that was birthed out of Perimeter Church — when Sally returned 48 hours later, the apartment was transformed.

"It was a huge difference!" said Sally. "[The mother] was just beaming! The place was neat as a pin."

In addition to the furniture and household items that the discipleship groups collected, another family was able to purchase a washer and dryer — just in time to wash all those baby clothes! Home Depot was even willing to give a discount once they heard of the family's plight. Another group went together and purchased a new microwave.

"This is what City Impact is all about," Sally said.

John Colegrove said that it was definitely a group effort to help re-establish this family's home in time for their baby's birth. "Many hands were helping here," said John.

Sally agreed. "This isn't our story. It's God's story."

Can you imagine trying to start a new church — and then being told that groups can't gather for months? That is the situation faced by both John Thompson (Kainos) and Andrew Harwell (Living Fellowship) when they planted their churches in 2020.

Fortunately, God had been preparing Perimeter for years for such a time as this. Perimeter has learned through experience what a hard, intense, joyful, frustrating, and faith-building experience church planting can be. So while COVID added a new level of challenge, the plan, resources, and support system the church has been cultivating for decades was put to the test. And we have two new churches to show for it.

"Church planting is a vital part of kingdom flourishing in metro Atlanta because of the centrality of the local church in God‘s plan," said Bob Cargo, Director of Church Planting. "Anything that is alive and thriving, reproduces! And that includes churches. It is life-giving to Perimeter Church and life-giving to our city to keep reproducing gospel-centered churches."

While Perimeter lists 27 daughter, granddaughter, and great-granddaughter churches — with a pre-COVID Sunday attendance of more than 6,000 — its actual influence goes much farther, as evidenced by our recognition as 4th on the list of America's Top 25 Multiplying Churches.

“If we use those terms [planting and participating] as some churches do in a very, very broad sense, such as providing money, people, mentoring, etc., the number of churches we have 'planted' would be in the thousands, including both U.S. and international church plants,” Bob says.

Below are updates from our most recent church plants: Kainos Community Church and Living Fellowship Church.

"COVID has made things much more difficult in terms of gathering people, or even gathering necessary start-up funding," said Bob. "We did all we could at a time people could not gather face-to-face. We appreciate the prayers for both of these churches."

"It's been quite a journey!" commented John Thompson, pastor of Kainos Community Church in Lilburn. "If it were up to me, I would have written this story differently. But the Lord is writing a better story than the one I would have."

Kainos, which was originally scheduled to start official services in September 2020, instead launched on Easter 2021. Sunday morning gatherings are outdoor at Lilburn Park and include adults and children alike. Fortunately, every Sunday so far has been sunny.

"I've mapped out the next six months for the church, but I've learned to hold that plan very loosely," said John. "It's more like a 90-day plan. And sometimes a 30-day plan."

However, John says that their small size has enabled them to be very personal with the way they are serving the Lilburn community. Instead of "service" referring to a gathering on Sunday morning, "service" is a way of living every day of the week — providing lunches to daycare workers, coffee and donuts for urgent care center staff and police, buying groceries for a struggling single mom, and helping cover the last bit of rent that allows a family to get back on their feet.

This elongated launch season has given the core group unexpected time to dream and re-envision what Kainos will look like: an unexpected blessing that came out of COVID.

"COVID may have changed some things, but it
hasn't stopped us from doing anything," said John. "We're still moving forward."

"In April we realized, if the Lord is going to plant this church, it will be in the middle of the pandemic," said Andrew. "It's not going away any time soon."

Instead of Andrew finding people to come to his church, that summer, the church came to him. A few families asked Andrew to help them offer something for the kids that wasn't on a screen. They wanted to worship together as a family, so five or six families started meeting outside for what was essentially children's church.

Fast forward a few months. Living Fellowship hit its fundraising goals in January, so Andrew was confident they could move forward.

A church has donated space for Sunday evening meetings for their core group. They hope to have their first official services in the late fall or early winter.

Perhaps the biggest blessing so far has been Ryan Chan, who moved to Alpharetta in January to co-labor as the church's Community Outreach Director.

"I am awed by the beauty of how God has been orchestrating this since the beginning," said Andrew. "Ryan and I are seeing a number of people joining us on this journey. It's not a huge group of people, but they're the right people."

Alex Byman had a ball last summer.
A Boy with a Ball, to be exact.

In this video, Alex tells how a single visit to Boy with a Ball during Rush 2020
inspired him to keep returning — even during a pandemic. And he learned
how God could use a young man, who thought he was stuck at home,
to accomplish Kingdom Flourishing in families — and in himself. 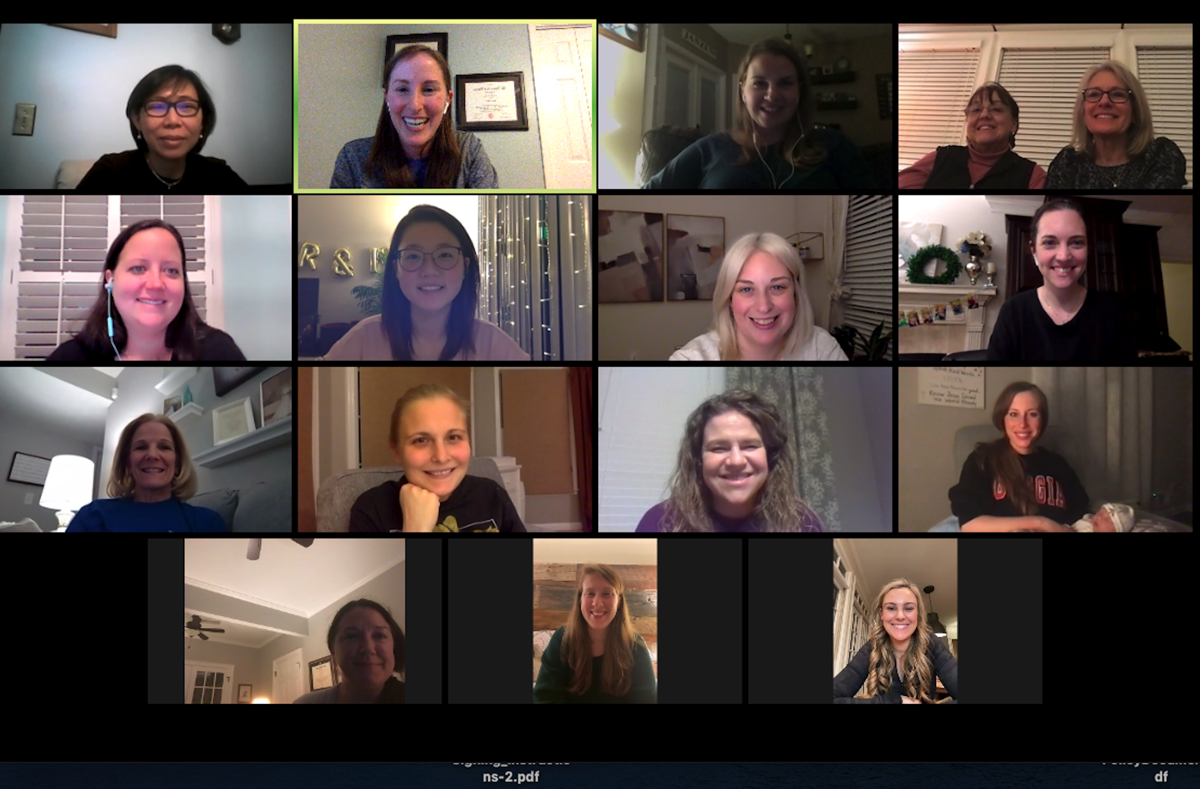 Traditional Bible study has been part of the Women's Ministry for years. Usually, about 70 people participate in Bible study each year.

"It has been so sweet," said Gail Hatcher of Perimeter's Women's Ministry. "There are ages and stages mixing. Mothers and daughters doing studies together. That doesn't normally happen when we're in-person in a big group. People just naturally gravitate towards people who are at the same place in life that they are."

Online Bible study has also reached groups of people who either couldn't — or wouldn't — be part of an in-person group. Like Kim Alexander, who is currently working and living in Tokyo.

"Living in Tokyo, I have been able to join two studies," said Kim, who works for Coca-Cola and is in Tokyo, busy preparing for the Summer Olympics. "It has been a blessing to connect on a weekly basis, grow my faith, pray with sisters in faith, make new friends, and re-connect with old friends."

Jennifer Hadden-McMichael's group had a member who had recently moved to the Northeast and had no other Christian friends yet in her new home. Her group was drawn to pray for her — that she would be strengthened and find community in her new home.

Hiromi Noda moved to the United States a year and a half ago. Prior to living here, she had never even opened a Bible, but she felt she wanted to learn about it. Even though she is still learning English, her thankfulness shines through in the email she sent Gail. Below is a portion of that email.

"I thank I joined through zoom under this hard time. I am encouraged and get a peaceful mind by the class. I can't help feeling the power of the gospel.

Gail says that women have told her that they will continue to do Bible study as long as an online option is offered.

"This is too big of an open door to ever want to close it," said Gail. "Too many women are finding their spiritual needs met here." 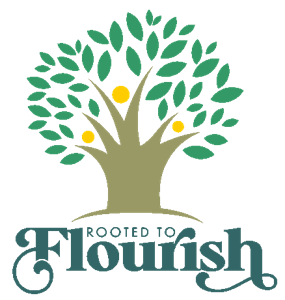 Your faithful giving is such an encouragement! Despite the uncertainty and challenges of 2020 and 2021, you have continued to heed God's call to give consistently and with a joyful heart. Because of this, we are in a strong position heading into the summer months when attendance, and frequently giving, decreases. It is because of your faithfulness that the impact contained in these stories was able to happen.

Please click below to visit our webpage for more information. Also feel free to contact Stacey or Jim for information about Rooted to Flourish or for answers to your questions:

Learn More About Rooted To Flourish

Click below to see previous Rooted To Flourish investor reports. 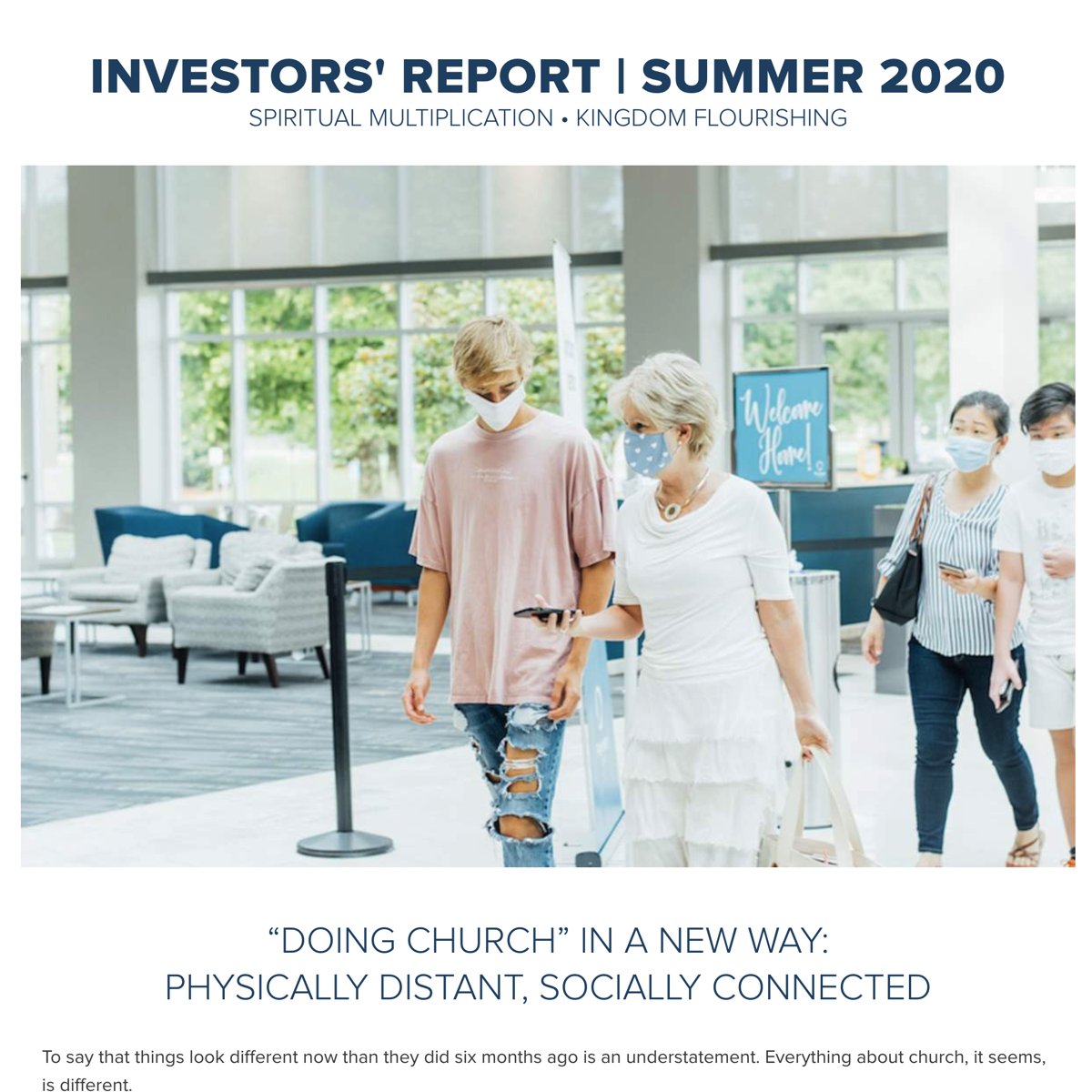 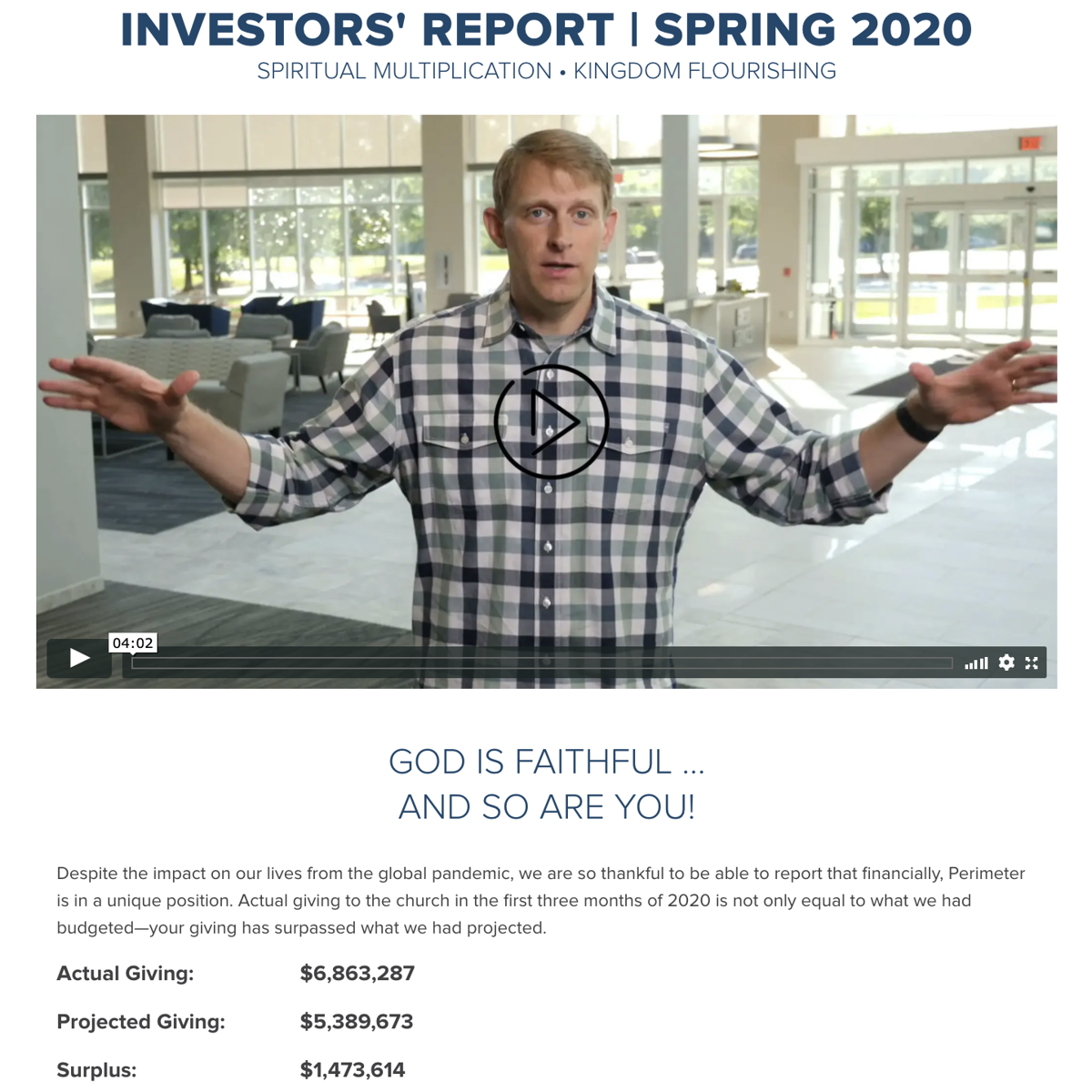 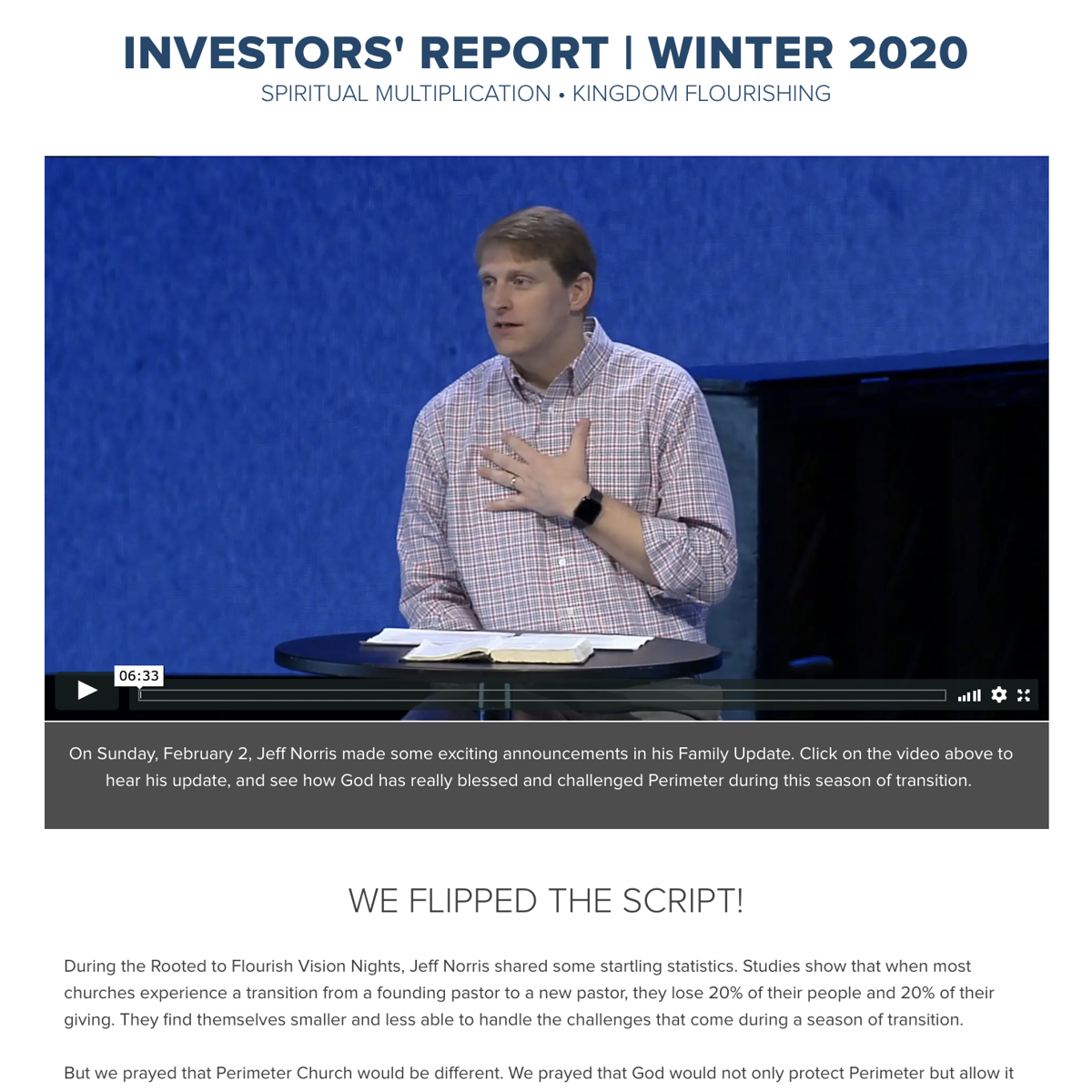